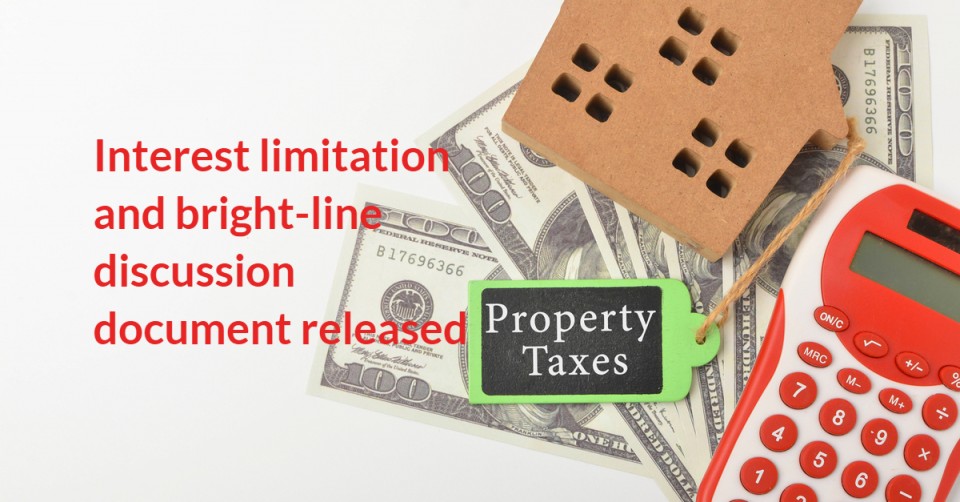 On 10 June the Government released their discussion document “Design of the interest limitation rule and additional bright-line rules”. The discussion document provides details on the proposed interest limitation and bright-line rules, following the 23 March 2021 announcements. Submissions on the proposed changes close on 12 July 2021.

The proposal is detailed and covers a number of issues. The proposals are mostly positive, but there are a number of issues that still need to be resolved in order to ensure the family home is not taxed inadvertently. The application of the interest limitation rules will be of particular interest to investors of newly built properties. Investors who have built new houses prior to 27 March 2021 will be disappointed to see that there is no recognition of their contribution to the New Zealand housing stock, and will no doubt be disappointed to see the harsh interest limitation rules will to apply to them as they are phased in. We have set out the main points of the discussion document below.

We have already discussed the proposal to limit interest deductions in our article Property investors hit hard by tax reforms but we have summarised the key points again. Restrictions from 1 October 2021 have been proposed on the deductibility of interest expenses that are incurred in relation to residential property.

For non-grandparented interest, it is proposed that all deductions will be disallowed from 1 October 2021.

What residential properties are caught by the interest limitation rules?

The discussion document proposes to limit interest deductions for debt used to purchase or operate residential investment property, which is primarily residential property rented to tenants.

The following residential property would be excluded from the interest limitation rules:

What interest will be subject to the interest limitation rules?

It is proposed that loans used to fund residential investment property will need to trace the borrowing to determine the purpose of the borrowing. This will determine if the interest is deductible or not (except companies, subject to the proposed company changes set out below). Changes are also proposed for refinancing an existing loan and transitional issues relating to pre-27 March debt.

The Government has proposed that property developers should be exempt from the proposed interest limitation rules as they are focused on increasing housing supply through the construction of new builds.

Options are being considered for applying the exemption to one-off developments as well as to professional developers.

The Government is considering whether some remediation work may qualify for the development exemption where it adds to the housing stock, for example by extending the life of older buildings or making a building habitable.

While interest deductions for residential investment property will be phased out from 1 October 2021, there is still the possibility that those disallowed deductions can be used to offset tax upon the ultimate sale of the property. The discussion document has considered 4 options:

The Government would like submissions on these options. Other than option 1, there will be significant changes in how accounts are prepared, and ongoing additional compliance will be required to ensure any relevant information is available if the property is subsequently sold on revenue account.

It was widely publicised that the Government would consider how new builds would be affected by the new rules. The first point to address is what will be considered a “new build”.

The Government has proposed that “new build” residential properties should be exempted from the proposed new interest limitation rules and will be subject to a “new-build bright-line test” which is effectively a five-year version of the new 10-year bright-line test.

It has been suggested that the following scenarios where a property receives a CCC on or after 27 March 2021 could be a “new build”:

Deductibility exemption from interest limitation may extend to subsequent owners

While it is welcome news that new builds will benefit from a five year bright-line test, there are ongoing issues with people being caught paying tax on the sale of their family home. The proposal to use a new build bright-line test will not resolve these issues. The new build bright-line test apples the same rules under the 10 year bright-line test, but for a shorter period of five years. This means that there is only a 12 month buffer period. If someone agrees to purchase land prior to title issue, they are treated as acquiring the land on the date of the agreement, they then have to wait for title to issue, then have to build. If they do not move into the property within 12 months of acquisition, then they will have to pay tax for the period they did not live at the property if they sell that property within five years of acquisition. Even where someone purchases land, if they do not live at the property within a year of settlement of the land, then they will not benefit from the buffer period so will be left paying some tax on any gains made during the period of ownership if the property is sold within five years of acquisition.

Some welcome limited relief from the interest limitation rule and bright-line test is proposed in relation to transfers to trusts and transfers where there is no significant change in ownership. This relief involves deferring the taxing point until there is future disposal of the property that does not qualify for rollover relief.

It is proposed that if a person disposes of their property to a family trust, that disposal can benefit from rollover relief for both interest limitation rules and the bright-line test where the following conditions are met:

The Government has also proposed a modified set of associated person rules to assist with this.

Interaction with the mixed-use asset rules

The focus of the interest limitation rules is on debt relating to residential investment property, but they will also apply to baches and other second homes if used to earn income. Changes to mix used assets are proposed to ensure they work with the proposed changes.

The discussion document is comprehensive and addresses a number of areas that will be impacted by the interest limitation rule and bright-line rules. The Government has many proposals, and has asked for submissions on their various proposals.

If you would like to understand how these proposals might impact you, or you would like assistance with making a submission, please get in touch with our tax team.

The above is intended for informational purposes only and should not replace specific tax advice.  For personalised advice on all tax issues please contact Julia Johnston at Saunders & Co